How to Choose the Best Homeschool Math Curriculum 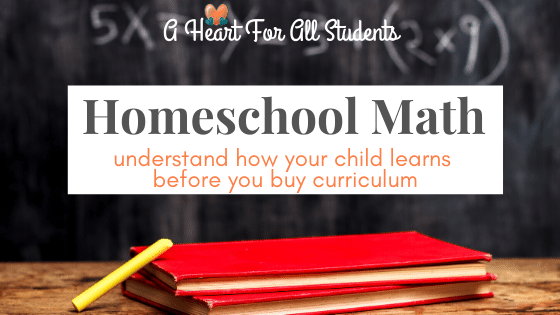 This is part 1 of a two part series focused on how to choose the best homeschool math curriculum for struggling students.

As homeschool moms begin to plan for the new school year, we want to do the “right and best” thing for our kids.

Many families choose to homeschool when the traditional system fails their child.  Honestly, it shouldn’t be a surprise that this happens.

Our educational system is designed to serve the masses.  By virture of being a system, it can’t provide an optimal learning environment for every child.

This only makes sense.

Here is the reality.

Ultimately, homeschooling allows the parent-teacher to choose the best teaching materials based upon their child’s unique needs. 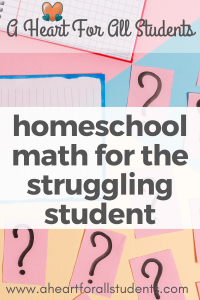 Best Homeschool Curriculum For Your Student

So when a new homeschool mom asks the ultimate question about the best homeschool curriculum, there really is no one right answer.

In fact, when I hear people asking this question, alarm bells begin to sound in my mind.

Do I sound dramatic?

However, there is a reason behind my madness.

When it comes down to it, I am passionate about learning outcomes for kids.

My heart aches for every to child grow up confident in their ability to learn.  There is not one mom out there who does not desire that her child be a lifelong learner.

In the long term, we want all of our kids to think deeply and know how seek truth throughout their lives.

With this in mind, it is crucial for parents to understand that every child is truly unique.  Every person learns best when equipped based on his or her own unique wiring.

So what does this mean for the new homeschooling mom?  How does she make the right choices for her child?

When referring to math in particular, we need to reframe the question from,

“What is the best homeschool math curriculum?”  to

“What is the best homeschool curriculum for my child at this time?”

There is never going to be one right answer to this question.

Our children all have different needs and those needs are going to ebb and flow as time and circumstances change.

The point being… give yourself grace. Take the pressure off when choosing learning materials for your student.

We all just need to do our best with the information we have at any one time.

4. Run Through These Questions Before Buying Curriculm

Ultimately, when deciding what the best homeschool math curriculum will be for our specific child, we want to ask the following:

Grab the FREE Homeschool 101 Planning Guide to help you walk through this process for each of your children.

Once you have the answers to these questions, you will be best equipped with what you need to make a solid decision for your child or children.

Let’s dig a little more deeply into the homeschool math materials out there.

There are two different approaches to math curricula out there: Spiral-based and Mastery-based.

Here is a brief explanation of the two and some factors to consider when deciding which approach will be best.

These homeschool math resources focus on one topic at a time.  Ultimately, the goal of this approach is that the child will master each concept before moving on to the next.

For our kids who struggle with shifting attention once “in the zone,” this approach can be very effective.

Think of your child who has the gift of hyperfocus.

You know the one…

The child who can become easily frustrated when asked to stop playing with his Legos.

Or the little girl who “never listens” when told it’s time to stop playing with her Beanie Boos because it is time to go.

Ironically, despite the name that indicates lack of focus, those with ADHD often can zero-in on an activity of high interest to the exclusion of the world around them.

This is referred to as hyperfocus.

“Many scientists, writers, and artists with ADHD have had very successful careers, in large part because of their ability to focus on what they’re doing for hours on end.”

For our kids who struggle to learn new math concepts, a mastery-based homeschool math curriculum may serve them well.

Using multi-digit multiplication as an example.

Once a student finally “gets it,” the last thing that student wants to do (or even can do) is suddenly shift to calculating fractions.

These kids tend to do well focusing their energy on one concept until they have it backwards and forwards.

Specifically, these kids often need lots of targeted practice over an extended time period in order to develop automaticity.

This is just a fancy way of saying that a student finally gets the concept without struggling.

Spiral-based curricula offer more variety in that they tend to introduce a new topic each week.

The first lesson of the week often includes multiple problems associated with the new topic.   However, the rest of the lesson will circle back to and spiral through older topics as review.

If you have a child who tends to be more math-minded or who needs more variety to stay engaged, a spiral approach is a great choice.

Interestingly, neither Mastery-based nor Spiral-based homeschool math is better than the other.

What works best will be completely dependent upon your unique child.

Referring back to that same ADHD brain, that same child may need more mental stimulation and variety of math problems in order to stay engaged.

This may make a spiral approach the better choice as was the case in our homeschool with my oldest daughter.

She tends to be more math-minded and has the gift of an ADHD brain.

In the beginning of our homeschool journey,  I heard that the mastery-based approach was the “best way to teach homeschool math.”

Understandably, I wanted the best for my daughter and so I chose “the best homeschool math curriculum.”

My girl’s ADHD, math-minded brain needed more variety in order to keep her engaged.  By pivoting to a spiral-based math program, she thrived.

Ultimately, what approach works best will depend on the unique-wiring of your student.

How to Choose Homeschool Math Curriculum

Again, whether your child does well with one or the other will be based on a number of variables.

These factors include frustration tolerance, aptitude for math, need for variety, etc.

Like everything else, it all depends on the learner.

I’ve created a Homeschool 101 Planning Guide to help you tease through the important questions to get a better picture of your child’s needs.

Grab a copy, take a deep breath and know that it’ll never be perfect.  Do the best you can and as you learn, be willing to look outside-the-box.

Homeschooling is a lifestyle of learning and growing for your children and just as importantly, you.

To help you make an informed choice about the best homeschool math curriculum options for your student, I asked the experts.

I asked some of the veteran homeschool moms in AHFAS private community to chime in.  They share what has worked, what hasn’t worked and why.  Praying they can save you some homeschool heartache. Check it out here.

And comment below with what math curriculum has worked in your homeschool.   Always excited to hear from you!

Plan your homeschool year to equip your unique child.  Includes crucial questions to ask yourself before purchasing any educational materials. 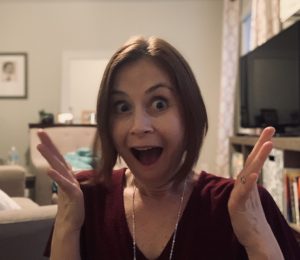 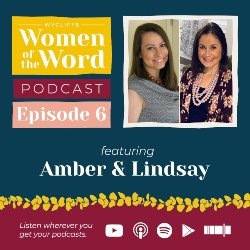 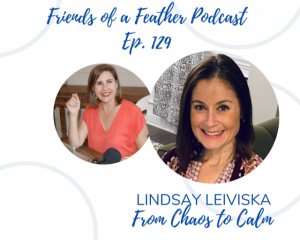 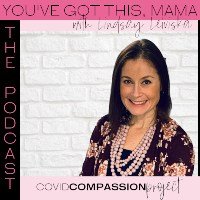